Jason "Jace" Kendall is a character on Glee Fan-Fiction: Same Directions. He was born differently and was born blind, which is why Jace uses sunglasses. He was created by TaylorSwift-FinchelFan.

Jace is more self-secluded than the other members. Everyone thinks he's just a big grump and puts a dark cloud over everyone's heads, but they don't know his past. On the inside, Jace is just holding back a lot of emotions he's afraid to tell. Once you get to know Jace, he's a softy, hopeless romantic.

When Jace was young, his mother left him and his father. His father went into a deep depression leaving Jace to fend for himself. Jace was young when all of this happened, so he had time to learn what was happening over time.

During this time, Jace became very independent, and because of that, Jace doesn't use walking sticks. He has a remarkable memory.

Ian will become friends with Jace. Ian will create multiple fund-raisers and have all the proceeds donated to like this instution for blind people. And this shall be easy because he's one of the most popular guys in school. All the people in the Glee club and even parents will participate..

Examples: Like at one fund-raiser, Connor's band will play and since they're so good people will come and they can cost for admission and concessions. The money for that can go to the instution. And like for another fund-raiser, Mrs. Winters and Mrs. Sandford will do a bake sale.

Jason is seen getting picked on by some jocks. Natasha intervenes and tries to help but Jace refuses.

Jace was first seen getting picked on by some jocks to Natasha's notice. She makes him come to her office and offers to help him. They talk and he confesses that he doens't want to spend the rest of his life being some blind kid. Natasha tells him that he could show his kill if he joined the glee club. He at first thinks she's wrong but then later auditions. He auditions singing Show Me What I'm Looking For and is accepted. He's last seen performing with Musical Ambition.

Because of Jason's tall, skinny-ness, and nerdy looking clothes, he is pinned as a perfect bully target. He is pale and has blind, blue-hazel eyes. He is usually found wearing more "up-to-date" and "cool" clothes to at least try to fit in. He has light brown (carmel) hair. 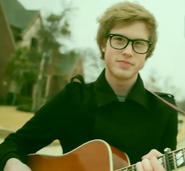 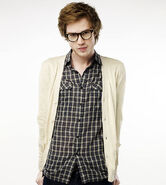 Add a photo to this gallery
Retrieved from "https://gleesamedirections.fandom.com/wiki/Jason_Kendall?oldid=9536"
Community content is available under CC-BY-SA unless otherwise noted.