Start a Wiki
Natasha West is a character on Glee:Same Directions. She is the Musical Ambition glee coach.She used to be Natasa West-Easton.

She is funny, sweet, caring, bubbly, laid-back, great at advice, eccentric, and lovable.But she's also honest and knows when give tough love. She has the tendency to act like a mom more than she should,but she's loved for it. She has a heart of gold and is filled with determination.She believes that there is always light at the end of the tunnel.She doesn't like to give up on anyone.

Her full name is Natasha Hazel West.Her dad was an acoholic. He used to beat her mom. At the age of 5, she was taken into foster care. Her dad was killed in a car wreck due to drunk driving and her mom became addicted to drugs. When she was 12, her mom was finally back on her feet and got Natasha and her younger brother, Noel back.

Her mom went back to college and became a nurse. She even remarried and then Natasha lived a great life. When she was 15, she learned she could sing, but pushed it aside. Her dream was to become a counselor and she did. She became a counselor and even married. Her and her ex-husband Robert Easton have a 5 year old son named Calvin Easton. But she soon found herself unhappy in her marraige and divorced.

Now she is the new counselor. She notices the gifts and abilities the gleeks have. She goes to Carly Morris and proposes a Glee club. The prinicipal reluctnantly agrees. All of the gleeks join. Not only does she help coach them in singing but she councels them as well. Soon all the gleeks develop personal relationships with her. She becomes their counsler,glee coach, and a friend. She eventually changes all of them in different ways. is oblivious to  Matt Jones crushing on her.

But right now her joy is her son, Calvin. She and Robert have joint custody of him; But he still lives with her. At first, Natasha was hesistant to get a divorce, because of the effect she was scared it would have on Calvin. But now she's happy she did. She thinks it was the best thing for her and Calvin.

Natasha is first seen in her office. Bored she walks through the hall and she sees Lena and Trent arguing. She intervenes and talks to Lena, but Lena doesn't listen. Natasha then sees Jason getting bullied by some jocks and steps in to help. She tries to talk to Jason and he tells her he doesn't need her help.At the end of the episode, she goes to Carly and suggests a glee club.

Natasha is first seen with her young son, Calvin.Natasha next gets on to a group of students and sends a student to detention for ripping down one of her flyers. Next she hears bad things about her glee club throughout the day.She later talks with Carly and forms an idea.At the assembly, she tries to talk to the students but when they didn't listen she performs a song.In the audiororium she loses hope that no one is coming but then Rose auditions. Which causes Natasha to decide to withheld the audition process until she gets enough members.She gets more auditions but the only ones that get accepted are Tyler, Lena, Charity, and Aayliah.

Natasha is first shown walking to the middle of the music room when she sees all of the students engaged in their own thing and she observes them. She tells them that she has selected Midnight Carnival to help the club with the music for contests. After some students are skeptical of the talent of the band she asks them to perform a song. Afterwards, she beginst to tell the glee club about the theme she's chosen for the week, but she's interrupted by Yasmine and Lia.Afterwards,she explains that she has chosen partners for everyone to sing a duet with. She's next seen in her office when Trent comes to inform her he's quitting. Instead of letting him quit she talks to him and finally breaks through to his head. Then she's in her office when Jane comes in to try to rain on her parade. She's also present during all of the duets. Last, she's seen in the audiotorium with Jane watching as the students perform Who You Are.

Let's Get It Started in Just Getting Started 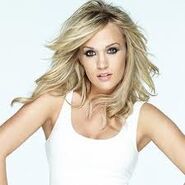 Calvin West (son of Natasha West and Robert West)
Add a photo to this gallery
Retrieved from "https://gleesamedirections.fandom.com/wiki/Natasha_West?oldid=10118"
Community content is available under CC-BY-SA unless otherwise noted.