Start a Wiki
Rosalena "Lena" Eve Garcia is a character in Glee:Same Directions.She is a member of Natasha's Musical Ambition.She is the girlfriend of Trent Brown and she was created by SamcedesandKlaineForever.

She is very sweet, kind, the girl next door, a great friend, but she has a mouth and if you piss her off you'll see her bad side and it ain't pretty. She is a loyal and good at advice and when you're her friend she loves with all her heart. But she does have a depressive side.

She was born Rosalena Eve Garcia. Her father abandoned her mom when she was pregnant with Lena. When Lena was little her mom would leech Lena on family members so she could go party and do whatever she wanted to. Then when she was old enough to stay alone which in her mom's mind was age 10, her mom would randomly leave her to go to clubs. On multiple occasions her mother would bring home random guys. Lena is plagued by the terrible memories of some of the drunken fights her mom had with all those different guys. Sometimes it'd get so bad that the guys would hit her too.

One day DHS came and took Lena away from her mom. But luckily before she went to foster care her abuela took her in. She's been living with her ever since. Once her mom was released from jail ,her mom just vanished. She left town and never came back. No one in Lena's family has heard from her since. It's a mircale if the woman is still alive considering how much of a druggie she was.

Rumor is that her mom had a son before Lena was born but gave him up for adoption. Lena has never met him and still doesn't know whether this was true or not. All she knows is that when her mother was 14 she vanished for a year and just returned and acted like nothing was wrong.

She still has nightmares from her wretched past.So she sings to release the pain because she says it helps. She sings in Spanish and in English.

She is Tyler Collins's BFF. They have a Kurtcedes similar relationship. They always have each other's backs. They're like brother and sister.Oh and Tyler Collins and Lena are obsessed with the Twilight, Hunger Games, and Harry Potter series and Sarah Dessen books. She plays guitar, drums, and piano.

Lena and her new bf, Dominic

Trenton Brown (on and off boyfriend of four years)

Lena is first introduced fighting with Trent. Natasha notices and tries to help, but Lena rudely turns her down and goes after him.She is shown again talking with her best friend, Tyler. Tyler tells her that she needs to move on from Trent, yet she refuses. We later see that Trent has been abusing Lena due to the bruise on her arm.

Lena is first seen talking to her best friend Tyler. She tells Tyler that joining the glee club would be stupid.We see Lena again as she re-thinks joining the glee club.Lena then tells Trent she wants to join the glee club to which they have an argument about.Lena and Tyler are later shown arguing to which Lena hurts Tyler.Lena stands outside of Tyler's house and plays him a song and dances to get him to forgive her. They make up.Lena auditions for the glee club with Tyler's support.Lena is shown happy with Tyler during Aayliah's audition. 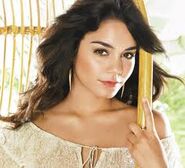 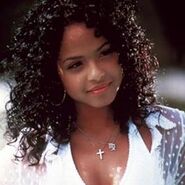 Add a photo to this gallery

Retrieved from "https://gleesamedirections.fandom.com/wiki/Rosalena_%22_Lena%22_Garcia?oldid=10116"
Community content is available under CC-BY-SA unless otherwise noted.